Calella is a coastal town of the Maresme region, in the Catalan province of Barcelona (Spain), and a city of said municipality, municipal capital of the same. The municipality had a registered population of 18 307 inhabitants (INE) in 2014 and a extension of 7.86 km². The city is 56 km from Barcelona and 25 km from Mataró (capital of the region).

In the 1970s and until the mid-1990s, it was a very important tourist destination for Central European tourism (especially German, Dutch, Danish, English and French), being popularly known as Calella de los Alemanes, reaching a tripling of population in the high season of tourism (which coincides with the end of spring, summer and the beginning of autumn).

Situation in the Maresme region: 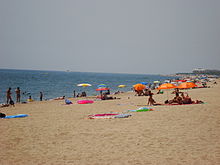 Calella beach, Església street (in Castilian, Church ‘) and Capaspre rambla are the points of greatest tourist attraction for its commercial and leisure centrality.

Other places of interest are:

Subscríbete a nuestra newletterSubscribe to the newsletter

Any cookies that may not be particularly necessary for the website to function and is used specifically to collect user personal data via analytics, ads, other embedded contents are termed as non-necessary cookies. It is mandatory to procure user consent prior to running these cookies on your website.